Consider a town whose road network forms an $N \times M$ grid, where adjacent intersections are connected by roads. All roads are bi-directional. Each direction has an associated number - the time needed to travel from one end-point to another. 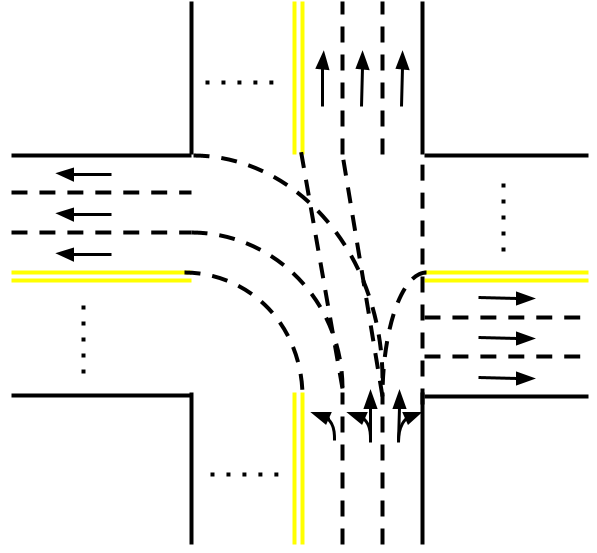 The rules for crossing intersections are illustrated in the above figure (suppose a car enters the intersection from the south). To make a left turn, it must be in one of the $L$ left-turn lanes; let’s number them $1$ through $L$ from left to right. The traffic rule says Lane $i$ must turn into the $i$-th lane (counting from the left) of the target road, except that Lane $L$ may turn into the $L$-th lane or any other lanes to its right.

Similarly, to go straight through an intersection, the car must be in one of the $S$ straight lanes; let’s number them $1$ through $S$ from left to right. Lane $i$ must go into the $i$-th lane (counting from the left) of the target road, except that Lane $S$ may go into the $S$-th lane or any other lanes to its right.

To make a right turn, the car must be in one of the $R$ right-turn lanes. For the convenience of discussion, we consider these lanes and those of the target road from right to left. Let’s number the right-turn lanes $1$ through $R$ from right to left. Lane $i$ must turn into the $i$-th lane (counting from the right) of the target road, except that Lane $R$ may turn into the $R$-th lane or any other lanes to its left.

In addition, a driver may change lanes in the middle of a road. When changing lanes, the taxi can only go into a singlee neighboring lane. Note that in the above rules for intersections, it doesn’t count as a lane change to drive into any of the legal lanes of the target road. The time spent on lane changes is negligible.

You are running a taxi company called “Safest Taxi” in this town, with the slogan “your safety is in your hands”. You let your customers choose the numbers $X$ and $Y$ for their trip, and the driver will make at most $X$ left turns and $Y$ lane changes to accomplish the trip.

What is the shortest time to fulfill each trip given the rules?

The second line consists of a single integer $D$. The town’s road network has $D$ road segments. Every adjacent pair of intersections must appear in the list exactly once.

Each of the next $D$ lines describes a road segment with the following format:

Each of the next $P$ lines describes a trip with the following format:

Output $P$ lines. The $i$-th line contains a single integer which is the shortest time to fulfill each trip given the rules, or $-1$ if no feasible route exists.

The first three lines of the sample output are illustrated in the figure below. 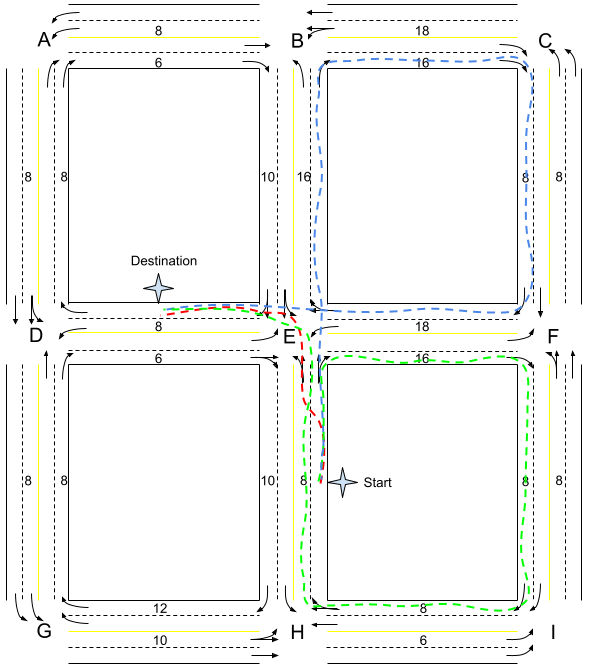